Macy’s (formally Dayton’s) Department Store in St. Paul downtown was built in 1962, containing 5 retail floors and 7 indoor parking levels, that were interconnected together.In 1985, the garage was found to have suffered major deterioration due to corrosion of the embedded reinforcing steel, which adversely affected the structural integrity and the appearance of this upscale shopping facility.

The Owner was unable to fund the initial $4.5 Million construction cost. BCG established the repair priorities that could spread the repairs over a 15 to 20 year period for an annual budget of about $250,000, without compromising or jeopardizing the public safety, thereby helped the Owner to overcome a major safety and budget crisis.

The Mezzanine and 2W parking levels are located above the Store space where repair would disrupt the normal operation of the Store.The repair had to be timed to when maj0or remodeling of the Store was planned.However, the extent of the deterioration might have caused failure to occur prior to the planned store remodeling.Some temporary repairs were executed to these above-store decks to maintain their structural integrity until the scheduled major repair took place.

The garage must be kept open for shoppers while it is under structural repair. Together with the contractor, Cy-Con, Inc.,  BCG designed a slab removal system, addressing the restrictive hour requirements for jackhammering. The deteriorated slabs were divided into panels, saw-cut, and removed to reduce the jackhammer needs for demolition. Jackhammering therefore, was limited just to the sections located above the remaining supporting beams.

Significance of the Project to Community

The 17-year repair program prevented many patrons, shoppers and visitors from major inconvenience in and around St. Paul downtown area, an area where the retail business has been struggling in recent years. BCG’s engineers designed a replacement concrete slab and coating protection system to prevent the recurrence of concrete deterioration in the future.

The repair program was completed for a total cost of $4.42 Million, a cost that is similar to the initial repair budget projection, but only about 45% of the cost for rebuilding a new similar size parking facility for the Store.The Owner operated its retail business and parking smoothly without facing any disruption during the entire repair period.The parking garage was completely restored to a safer, more convenient and pleasant space .

The Advancement of the Engineering Profession

The project demonstrated that repairing existing structures generally requires application of innovative solutions to challenges that are unlike most other building projects.The success of this project illustrates the engineering professionals’ ability to assist the Owners, by offering them a workable solution that not only solved their problem, but also prevent the recurrence of the same problem in the future.The Owner’s confidence on the same engineer who did the initial study to execute and carry through the entire restoration program over a 17-year span is a great testimonial that professional engineers not only can serve society on technical challenges, but also are sensitive to the Client’s operational needs. 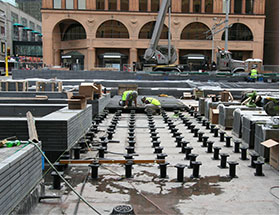 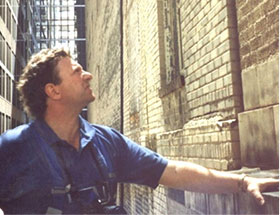